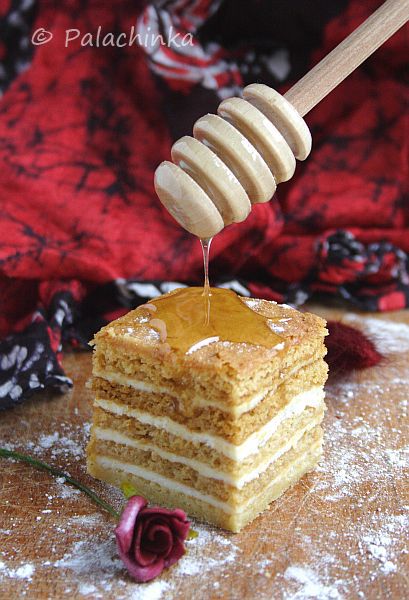 Medovik is one of the most popular cakes in Russia. And for a good reason. After it appeared on Coolinarika everybody got crazy about it

The version that I give you is with the sour cream (медовик со сметанным кремом) which is one of the variations of the cake, but the recipe I’d really love to see is by Farida and I hope she will post about it very soon

Update! Farida made her version of Medovik. From the comments section I realize this is probably the original version. And judging from the recipe, sounds to me that it’s tastier to!

Cook eggs and sugar in a double boiler until it doubles in size stirring continuously. In a bowl melt honey with the margarine and add to eggs. Continue to whisk then add baking soda.

Remove from heat and start adding sifted flour while still warm. You should add flour carefully until you get a very soft and sticky dough. Cover with a plastic wrap and let cool. Do not worry, the dough will harden after it cools. After that, start taking pieces of the dough, add more flour if needed, and flatten very thin on a piece of baking paper that is the same size of your large oven pan.

Bake in a preheated oven on 180°C while golden. It takes only a few minutes, so stay in front of the oven to react quickly.

How many biscuits you will make is completely up to you. I made 5, but after seeing Ljilja’s version, think it will look far better with more layers. 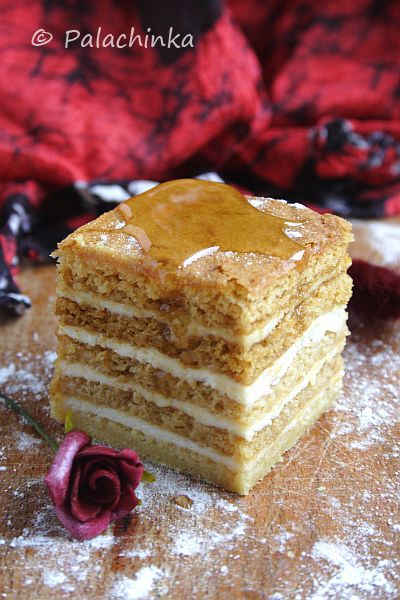 Whisk sugar with sour cream slowly. Careful, if you whisk too hard it may start looking like a soup

Put it in the fridge to cool and harden a little while baking biscuits.

Assembling: Biscuit, filling, biscuit, filling… After that, wrap in a cling film and put in the fridge overnight. Put some weight on top.