Meatballs with Raisins and Cashew Nuts 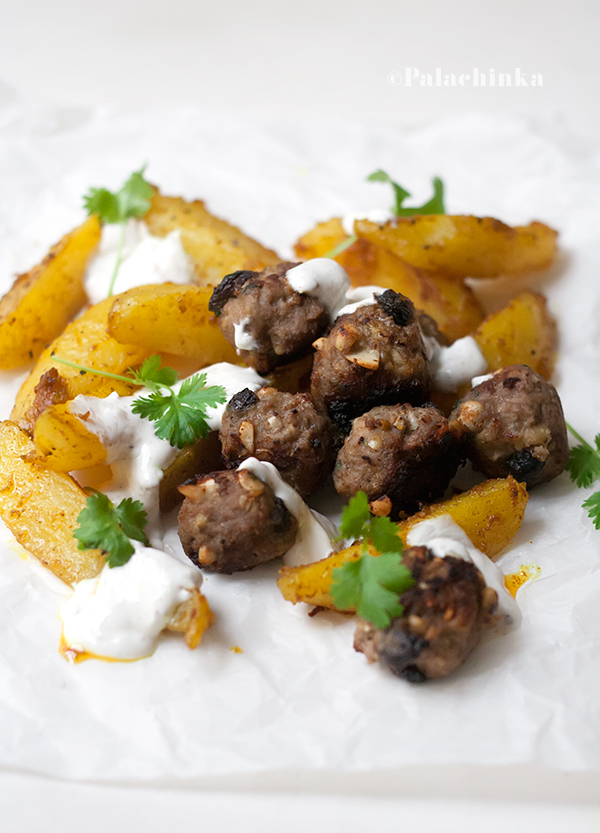 I have an obsession with cumin.

It simple. To me, everything tastes better if you sprinkle some cumin over it. And the most beautiful smell that can get out of a kitchen is the smell of toasted cumin seeds. That’s why to me, these meatballs and potatoes are to die for. Because there’s cumin in the meatballs, and on potatoes and inside the sauce. Really, really delicious.

Meatballs with Raisins and Cashew Nuts

Mix all the ingredients except olive oil in a bowl with your hands. It should not be too runny, but also not too dry. Form the mixture into small balls. If the mixture begins to stick to your hands, moisten them with a few drops of olive oil.

Heat some olive oil in a pan (only enough to cover the bottom of the pan in a thin layer) and saute meatballs on medium heat in batches. Make sure you turn them from time to time. Place them on a paper towel so the excess oil drains out.

Peel the potatoes and cut them into wedges. Drain them with paper towel and transfer into a large bowl. Generously season with cumin, add the rest of the spices (don’t overdo it with cayenne pepper), pour some oil and mix well. There shouldn’t be too much oil, only to cover the potatoes.

Line one or two large oven pans with baking paper and place the potatoes in one layer. It’s better if they don’t overlap. Roast them on high heat in a preheated oven until they’re soft if pierced with a fork. Turn them on the other side while they roast so they get nice crust evenly.

Mix everything to taste and keep in the fridge until you serve it.

The recipe is adapted from Orangette.