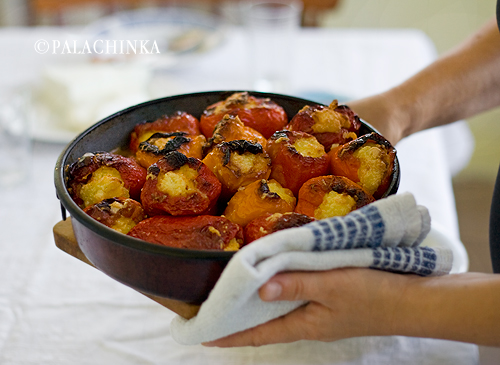 I’ve had these peppers for the first time a few years ago at Gaga‘s home. Something new to me, we usually eat peppers stuffed with a mix of ground meat and rice. And if they are stuffed with cheese, I’ve only had roasted and then stuffed peppers. In this part of Serbia, they don’t skim milk before they make cheese, so cheese is strong and salty. They often use sheep or goat milk cheese. This is one of those dishes Gaga learned from her mom, and I was lucky try the original also. The recipe that follows should be a guide for finding your perfect combination of cheese and peppers.

Cut out the stems from the peppers and remove seeds. Mix eggs with cheese, season with Vegeta to taste and add a little oil. Use this mixture to stuff peppers and place them in a baking dish. Sprinkle with more oil and bake in a preheated oven in 390°F/200°C.

Version à la aunty Bine: Peppers are red and orange, from her own garden, picked on that day or the day before. Prepared, they are baked in the oven of a wooden stove, until the “look exactly as they should”. We ate them hot, for lunch, but they were also very good when we had them later for supper

And now, I want to show you some of the photos I took in this organic garden over the years and seasons I visited