I made this cake two months ago, but decided not to post about it until today. Wanted to share something really exceptional with you today, and this cake is exactly that. It was made somewhere in 19th century to honor Pál Antal Esterházy, minister in Austro-Hungarian Empire. And although it became one of the most famous cakes in Europe, how and why exactly was made is hard to say. I even found that it was made for an Esterházy princess. Either way, if you come to Vienna or Budapest, don’t miss it, that’s where they make it the best. Until then, here is a brilliant recipe by Superkemija. 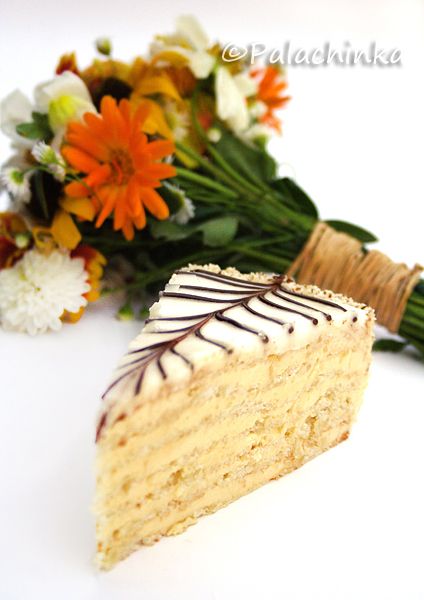 Toast almonds on a non-stick pan for about 5 minutes, until they begin to get golden. After they’re cooled, ground them. Cut 7 pieces of baking paper in a shape of a 30 cm side square. Draw a 26 cm diameter circle on each of them. Place all pieces of paper on a table. I know, you’ll need a very large table ;) Spread some butter over the circles (very important, if you don’t you wont be able to peel the paper of the biscuit). Preheat oven to 200°C.

Beat egg whites with sugar very stiff. It’s good when if you turn the mixing bowl upside down the egg whites still stay inside the bowl

Carefully and slowly whisk in ground almonds. Spread the batter as even as you can over the circles (photo). Bake each layer for about 7 minutes – until it get a bit golden (photo).

Beat butter foamy with a mixer. Mix egg yolks with vanilla sugar and powdered sugar. Slowly stir in flour. Boil milk, remove from heat and stir in the yolks cream. Stir with a wooden spoon and return to low heat. Stir continuously. In a couple of minutes it will begin to curdle. Remove from heat and mix into a smooth cream with a mixer. To cool it, place pan with a cream over a larger bowl filled with ice cold water and continue to mix. Mix butter into a cooled cream.

Now, take one layer of biscuit and spread a thin layer of cream over. Continue to the last layer. Don’t spread cream over a whole last layer, only a little (photo). Finally, spread cream on the side of the cake. Plan in advance, there isn’t a lot of cream, make sure you have enough for everything.

Start adding sugar to the egg white a little by little. Stir until you get thick mass, then add lemon juice, and now, depending on the size of egg white, add more sugar. This shouldn’t be neither too runny, nor too thick.

If you are uncomfortable with the raw egg white in the mirror, head over to Cafe Chocoláda for a hack with orange/lemon juice.

While you’re preparing the white mirror, melt the chocolate. Pour it into a freezer bag and cut a tiny hole on one edge. Everything should be done very fast – the net won’t look pretty if the mirror begins to dry before you draw on it.

Spread mirror on the top layer of the cake, immediately start drawing concentric circles with chocolate (photo) and then start drawing lines using a toothpick from the center of the circle to the edge, then in the other direction, until you get the net (photo). At the end, put some ground almonds (not blanched) on the side. Keep in the fridge overnight.