Anyway, on that piece of land they took, a factory for making jams and pickles was built. As a child I used to peek through the ugly fence and the factory window and I could see that they used to put labels on jars in that part of the factory. And those jams and pickles were world famous, and the people of Grocka proud. Sometimes, the smell of rotten eggs came out of the chimney, and I remember my grandmother making me go inside, cursing the factory and the workers and the drive.

When the whole country started to collapse, so did the factory. The drive had stopped. The thieves, workers and such, stripped the factory of the machines, jars and lids. And on the part of the fence that divided the factory land from our yard you could see that it was torn and that thieves came to the factory through there.

In time, on a small piece of land between our house and the factory elderberry and a walnut tree grew. The land was covered with nettle and sorrel. Most of the people think of a sorrel as spring plant, but to me it was in season all the time, since we used to cut the weeds, and each time we arrived there was another batch of young sorrel, enough for a pie or soup. And I like it most at this time of year. It is too cold for anything else to grow, but not enough to stop the sorrel. There’s tomato sauce in the basement, a wooden stove in the kitchen, a big crack on the wall of the house as they digged in the factory for some reason and the ground on the whole street is settling down…

Remove the middle stem from sorrel leaves. Let the soup boil. Reduce heat and add sorrel and simmer until the leaves soften enough so you can eat them.

When sorrel is cooked, add tomato sauce, as much as you like (about 1/2 cup of my tomato sauce is enough), season to taste and serve. Add a lot of pepper as it goes well.

My grandmother used to save pig skin removed from the bottom of smoked bacon and put it chopped to cook with this soup. Try it sometimes, it’s nice… 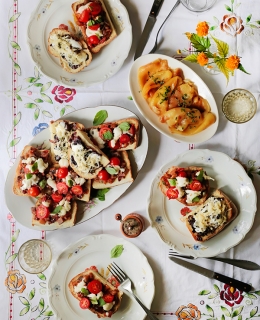