Walter is a combiantion of regular and fast food restaurant and it serves Bosnian barbecue. Besides traditional Bosnian decorations, the place is filled with photos from an old and very popular partizan movie Valter brani Sarajevo. That’s why the name – Walter. A catchy, unique and very effective combination.

To talk about Bosnian food without mentioning Turkish would be just wrong. Actually, all the Balkan cuisines were highly influenced with Turkish cuisine and in Bosnia, the influence is highest. Although originating from Turkey each of the food come with a unique Bosnian twist.

Next up is about the food we ate in Walter and here you can read Ana’s impressions (text in Serbian). And how the whole idea of the reviews came to life read in the previous review.

Milk skin is made throughout the Balkans and is actually milk fat that separates from milk after heating. It is collected and than salted and it’s a real delicacy. 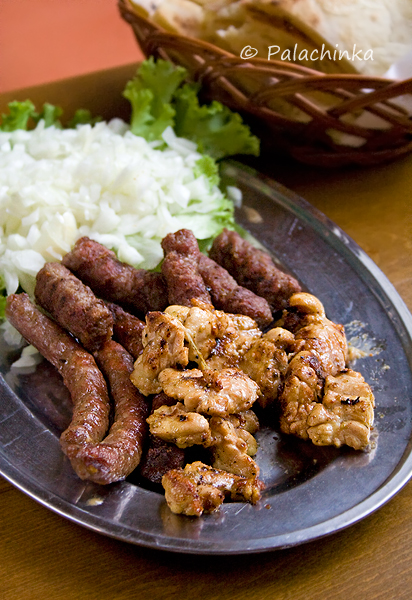 All the other food came together on a large oval plate: sweetbreads, ćevapi and sudžuk. Sudžuk is Bosnian version of Turkish sujuk – a dry and very spicy sausage. This one was fine, although I never had the chance to have an original, only the ones made in Serbia.

To be more precise, only a half of a plate was meat. The other was diced onions. Tons of it

Generally, throughout the Balkans, people eat lots of onions with grilled meats and products as it pairs perfect.

Restaurant Walter is famous for their ćevapi. They are pure beef and made according to a secret recipe. It is actually another regional variation of Turkish kebabs and are considered a national dish in both Serbia and Bosnia and Herzegovina. We eat a lot of those here and the ones in Walter were nothing special. In Sarajevo, if you eat it as a fast food you will get it inside a somun.

Somun is a type of Bosnian flatbread. Both eaten as regular bread and as a bun for the fast food. Ii is amazingly good and a must try!

I’ve never had sweetbreads before. And being an offal person, now was the perfect time to try. Before I continue, I need to say that here in Serbia there is an untrue popular thought that sweetbreads are balls and hence, most of the people avoid them. They are actually thymus, a gland, usually from veal, looking similar to the chicken liver and pink in color. It is incredibly soft and tastes heavenly. I am in love!

A few pieces were a bit raw inside, but I personally don’t have a problem with raw beef.

Deserts – Bosnian: baklava, tufahija, urmašice… Again, Turkish readers will recognize all of this. Bosnian food is very very similar to the Turkish. Ana said that baklava was good, but I’m not such a fan of it at all, so this one didn’t appeal to me too. Too much walnuts in the filling. I was looking forvard to my urmašica.

Urmašica is a date-shaped pastry drenched in a sweet syrup. This one was fine, but to me, it needed more syrup.

Prices are moderate. All this plus a glass of wine and a beer was about 19 euros. What I didn’t like is the fact that one portion in a kebab place is not enough for a meal. And it should.

It is very hard for me to give a final thought on this place. We ate well. And I also remember that we went home unsatisfied, and me with a guilty conscious for suggesting the place. But, now, after some time has passed, I’d say it wasn’t bad at all and I would even recommend it.

They bought me with sweetbreads :P

Disclaimer: All the reviews on this site are a matter of personal opinion and taste and do not represent absolute truth to everyone. I don’t think that everybody should, or will agree with what I write. 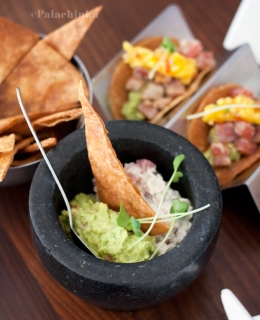